What do you think you know about pokemon uranium? Who is this Urayne guy anyhow, and what does your dead mom have to do with it, and what's your dad up to besides forgetting you?

AND WHY IS THE REAL VILLAIN HIKER LERHIT?

I really wish to know the first person that came up with this lol. That was completely unintentional in case you are wondering.

Involuntary Twitch wrote:One of the biggest mysteries, one that we have deliberately kept in the dark, is the origins and story behind this guy:

The Atomic Pokemon
A man-made Pokémon that has the power to split atoms. It requires radioactive fuel to function, or else it enters a dormant state.
One last thing to add: this isn't his only forme! He has a total of 3 formes

This game is about the Illuminati and their leader, Hiker Lerhit, systematically taking over the world with the use of unstable nuclear type pokemon. Your mom is so in on it.

I'm thankful the Lerhit thing was unintentional, haha. First time I played the game I noticed that and was like "...really?" It was the only thing that left a bad taste in my mouth so I'm pleased that was just unintentional.

Also it's blatantly obvious that the plot will result in a revelation where Urayne is your real father, and was also a Pokemon Master who turned to darkness, after which he will cut off your hand and Theo will be sealed in carbonite. Also Maria is your sister and you'll overthrow the League when Urayne turns back to good and throws the Champion down a giant hole.

I am pretty sure not, sounds original enough for uranium to me!

The details of Urayne's life are quite inconsequential.... Very well, where do I begin? His father was a relentlessly self-improving drunkard from Venesi with low grade narcolepsy and a penchant for buggery. His mother was a 15-year-old Winotiger named Chloe with webbed feet. Urayne's father would womanize; he would drink. He would make outrageous claims like he invented Tracton. Sometimes, he would accuse pokeballs of being lazy. The sort of general malaise that only the genius possess and the insane lament... Urayne's childhood was typical: summers in Bealbeach... surf lessons... In the spring, he and his family would make meat helmets out of stray Dittos... When Urayne was insolent, he was placed in a nuclear reactor and fed energy roots—pretty standard really. At the age of 12, he received his first rare candy. At the age of 14, a nameless Tandorist pastor ritualistically bestowed sermons upon Urayne — there really is nothing like a good long sermon — it's quite breathtaking... I suggest you try it. At the age of 18, he went off to evil chemistry school. At the age of 25, he took up tap dancing. he wanted to be a quadruple threat — an actor, dancer...

"It was our first family holiday together just as I was finishing up at the plant.  Your father brought the two of you out to the plant.  I stepped out to wash up, but the nuclear reactor.... It was no accident; it was an assassination attempt by Larkspur.  I thought only you survived.  I should have told Urayne the truth earlier, but those Venesians had made him so damn evil."
-- quote from Lucille...probably 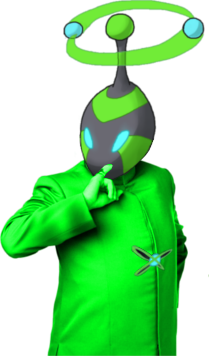 Masato that is a work of literary art you just crafted, my applause is yours.

Guys (and girls)! I finally figured it out! If Lerhit = Hitler, than Urayne = Urine! And that means the game is about Hitler's Urine and your mother being a radiactive abomination and the leader of the Nintendoluminati!

Or even better, Urayne = Uranus = Ur anus = Your anus.

It's about "Hitler, your anus, and your mother being a radioactive abomination and the leader of the Nintendoluminati!"

h0b099j wrote:Masato that is a work of literary art you just crafted, my applause is yours.

Thank you, good sir.  I took it from Austin Powers in Goldmember and tweaked it to suit the occasion

This is super dark, but the Professor Larkspur section obliquely suggests that your mother was actually one of the scientists (probably the scientist) most closely involved with the Urayne project. Given that the meltdowns are probably deliberate in nature (or at least caused by people deliberately messing with forces they don't fully understand), I think it's linked to Larkspur's notes that she (the scientist) "knows too much" and "is too close to the experiment." So, yeah. I think your mother was actually working closely with/on Urayne and was set up to die in the meltdown by Larkspur and whoever he's working for. My guess is a showdown at either the first or third reactor, involving at least you, Theo, Urayne, and the bad guys, and possibly your fathers as well (hoping Theo's father isn't secretly one of the bad guys).

Wait, but didn't Theo's father die? Or at least that's what the game seems to suggest. He was at the nuclear plant during the meltdown and Theo talks about how he hasn't been in contact with his father since the meltdown.

You're correct in that it has been strongly implied that Theo's father is dead; however, one might say that they're pushing that idea a bit too much, which suggests that Theo's father will likely turn up alive.  I, unfortunately, have been too focused on training up my nuclear team to get too involved in the plot.  During my next playthrough, I'll be making sure to gather all of the information that I can.